[Jeffers Inducted into Hall of Fame] 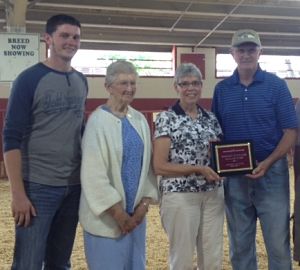 Each year, Wisconsin Pork Association recognizes an outstanding individual who has demonstrated a long time commitment to the Wisconsin State Fair in the open or junior shows, and to developing a quality breeding program, by inducting them into the Hall of Fame.

Dennis Jeffers’ interest in spotted hogs began in the summer of 1971 at the Summer Type Conference in Elkhorn, WI.  Under the encouragement of Don Lang, he attended this event and watched the show.  It was there he also met Bob Symonds and Bill Farrer, and all three of these men became great influences and role models for Dennis.

Later that year, in the fall of 1971, Dennis started his spotted operation.  He had his first production sale in 1976.  The weanling pig sale this spring was the 54th sale to be held at his family farm, which has been passed down through the generations since his grandfather purchased the farm in 1927.

Other honors Dennis has received include the 1976 Pitstick Memorial Award which recognized him as one of the nation’s most outstanding young spotted breeders and induction into the Illinois Spotted Breeders Hall of Fame in 1999.  He also served on the National Spotted Board of Directors from 1992-1998.

Jeffers has always been, and continues to be a strong supporter of spotted activities and breed improvement.  Those who have met Dennis say he exemplifies hard work, dedication, honesty, and integrity.  Dennis is the son of Bonnie and the late Jerrold Jeffers of Poplar Grove, IL. He has one son, Jerry, who lives in Clinton, WI.