The Wisconsin Pork Association recently recognized producers and industry members for their dedicated service at the 2019 Pork and Corn/Soy Expo, held on January 31 and February 1 in Wisconsin Dells.

Each year, the Wisconsin Pork Association presents a Distinguished Service Award to a fellow individual whose contributions to the Wisconsin swine industry merit special recognition. 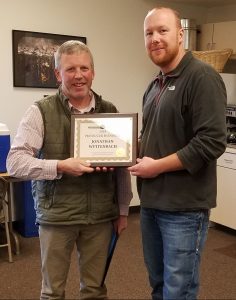 The 2018 Producer Distinguished Service award recipient is Jonathan Wyttenbach. Jonathan has been a dedicated leader in the pork industry and is involved in both Wisconsin Pork Association and the Sauk County Pork Producers.

Jonathan has served several terms on the WPA board of directors and has held multiple leadership roles including serving as president and vice-president. He has also served on several WPA committees, represented Wisconsin as a delegate at Pork Forum, and was in the running for National Pork Board’s Pig Farmer of the Year award. In addition, Jonathan has been a leader in the Sauk County Pork Producers for many years and is highly involved in the county group’s activities.

As a long-time member of the WPA Pork Schoppe committee, Jonathan has volunteered countless hours of time setting up the structure each year at the State Fair. He also built a new kitchen area for the Pork Schoppe and has helped with many other improvements to the stand. In addition, he and his family have volunteered their time working during the fair each year.

Jonathan has hosted several tours on his farm for restaurant business leaders and healthcare professionals to help them better understand modern pork production. He has also worked hard to grow the silent and live auctions during WPA’s annual expo; both of these auctions are important fundraisers for WPA’s youth programs and other activities.

Jonathan and his wife, Rachel, live in Sauk City. They have five children.

The pork industry is fortunate in having many industry representatives who are dedicated to promoting and serving the industry. The Wisconsin Pork Association honors these individuals and companies by presenting them with the Distinguished Service Industry Honoree 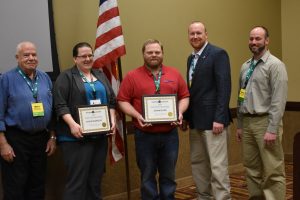 Award. The 2018 award recipients are Adam Hady and Lyssa Seefeldt. Adam and Lyssa are members of the UW-Extension Swine Team and have made significant contributions to swine programming throughout the state.

Adam Hady is the Agriculture Agent for Richland and Crawford Counties. He has been a county agent since 2004 and part of the swine workgroup/team since 2010. He has experience in many areas of agriculture, with a strong focus in livestock production with a specialty in swine and poultry. Adam has published various factsheets in regard to small farm swine production, including two whitepapers published in the Pork Information Gateway. In addition, Adam serves as a Pork Quality Assurance® Plus and Transport Quality Assurance® adviser.

Lyssa Seefeldt has been the Agriculture agent for Extension in Marquette County since 2013 and part of the Extension swine workgroup/team since 2014. Lyssa has helped coordinate the annual Badger Swine Symposium, including selecting discussion topics, facilitating speakers, and gathering feedback from attendees. Through her leadership and partnership with UW-Extension and the UW Agriculture Colleges, Lyssa has helped grow the Badger Swine Symposium and other swine education programs in the state. Lyssa is also a Pork Quality Assurance® Plus and Transport Quality Assurance® adviser.

WPA acknowledges the efforts of individuals in the ag industry to communicate with others. The 2018 Agri-Communicator award recipient is Melissa Wolf. Melissa has been involved in Wisconsin Pork Association activities and the Grant County Pork Promoters for many years and has been a continuous advocate for the pork industry. 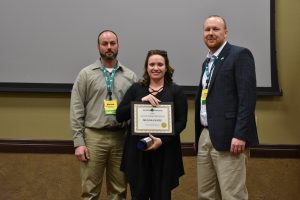 Melissa has played an important role in Wisconsin’s virtual farm tour program for elementary school students over the past several years. Using video technology, Melissa has helped open the barn doors and provide an opportunity for students learn more about today’s pig farming practices. Since the program began in 2016, Melissa has spoken with over 1300 students and teachers throughout the state.

In addition, Melissa has been a strong communicator in her local community as well. Each year, Melissa has taken a pig into her kids’ classrooms to help teach the students more about pigs and pork. She has also shared information with area print publications and contributed to a feature story on pork production that was included in the statewide Growing Wisconsin magazine. Melissa also participated in an educational event for Wisconsin nutrition and dietetics professionals where she talked about how pigs are raised today. She also participates in promotion and fundraising activities for the Grant County Pork Promoters.

Melissa and her husband, Shannon, are the third generation on their family farm in Lancaster. They have three sons, Mitchel, Nolan, and Ross.